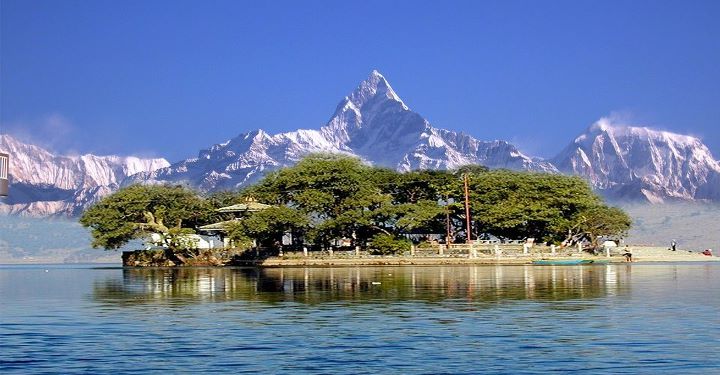 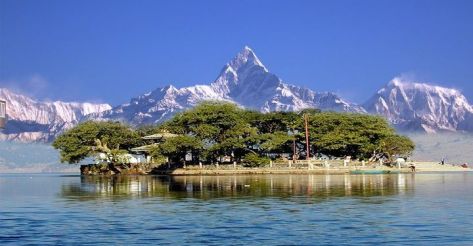 Destruction of tourism facilities combined with the drastic decline in foreign tourist arrivals post disaster have significantly impacted the revenue generation from the tourism sector. An estimated total of NPR 62.4 billion of losses in revenue would include tourism revenues, air transport revenues, tour operator revenues, trekking revenues and restaurant revenues.

The losses in revenue seem to cascade for several years starting from May 2015 thru June 2017. Losses are expected to stop once all the destroyed assets are rebuilt and the number of tourists have recovered to normal levels. Of the total damages and losses estimated in tourism, the private sector shares a whopping 92% i.e. over NPR 75 billion.

The majority of registered hotels are located in the two main tourist hubs of the country i.e. Kathmandu and Pokhara. Hotels range from non-star tourist standard to five star accommodation in these locations. As per the 2012-Survey of Central Bureau of Statistics (CBS), there is a total of 522 star and non-star hotels with 11,087 beds and 21,498 rooms within the Kathmandu valley alone (Table 4.1A).

Table 4.1A: Number of hotel accommodation in Kathmandu valley by category & capacity

Table 4.1B: Tourism facilities in Pokhara

In the wake of the disaster National Society for Earthquake Technology-Nepal (NSET) touched base with around 40 star hotels throughout the Kathmandu valley to seek preliminary damage situation of the hotels. Nearly 30% were found to be in bad shape with either significant structural or non-structural damages reported over the phone. Few weeks after the major shock of 25th April, NSET, along with the members from Ministry of Culture, Tourism and Civil Aviation (MoCTCA), Hotel Association of Nepal (HAN) and Department of Urban Development & Building Construction (DUDBC) was involved in conducting rapid damage assessment of 81 buildings of 48 hotels & resorts within Kathmandu Valley. Among them inspected, 3 hotels were found unsafe. The damage assessments helped most of the hotels in Kathmandu to decide over continuous operation as well as to determine their options for repair, maintenance or retrofitting.

A significant total NPR 16,295 million (worth around 86% of the total damages in tourism sector) of earthquake damages in tourism sector included the partial or full destruction of hotel buildings, infrastructures, restaurant facilities and furniture in the affected areas (Table 4.6). A few hotels in the Kathmandu Valley including Nagarkot were completely damaged with a majority suffering minor cracks. As estimated by the Hotel Association of Nepal (HAN), in the wake of the disaster, the occupancy level of the hotels in the valley was no more than 25% to 30%. Various tourist accommodations of different types were either fully or partially damaged in the Langtang, Gorkha-Manaslu, Khumbu, Charikot, Kalinchok, Jiri and Rolwaling areas and in Dhanding district.

As per Ministry of Culture, Tourism & Civil Aviation, 2014 update, there are 226 registered community and private homestays around Nepal but a significant number of homestays are not yet registered with the government. As per the survey performed by Nepal Tourism Board (NTB) in 2011, the total number of non-registered properties was 2,604, which provided 35,789 tourist rooms and 69,040 tourist beds in the 15 major and 5 minor tourism sites. Most of these additional lodgings are homestays, teahouse lodges and monastery accommodations.

NPR 1,720 million worth of damages in homestays infrastructures were recorded. The amount is 9% of the total damages experienced by the tourism sector. Further, in coming days NPR 495.3 million of losses are estimated in Homestays. National Trust for Nature Conservation (NTNC) estimated that NPR 415.3 million of damages were suffered by the Eco-Lodges in conservation areas (Table 4.6).

Restaurants in Kathmandu reported that a total of 335 contractual workers lost their jobs after the earthquake. Restaurant in the Kathmandu Valley alone expected to register NPR 11.1 million in income loss during the months of May thru December 2015 (Table 4.6).

The tourism statistics for 2014 shows a total of 1,860 trekking agencies and 61 rafting agencies in Nepal compared to 1,524 and 40 in 2012 respectively (Table 4.4A). Trekking Agencies’ Association of Nepal (TAAN) reported about 40,000 employees (including guides, porters, cooks, etc.) engaged in the trekking subsector in all the major trekking destinations had no jobs between May and July 2015.

Compared to last couple of years (Table 4.4B), the trekking visitors in the higher end segment are more likely to cancel their visits and the impact is expected to be a 70 percent reduction over a 12 month period after the earthquake. The number of lower-end trekking groups is expected to recover relatively quicker, with an estimated reduction of 20 percent over the same period.

A notable number of infrastructure destructions have badly hit the trekking sector. 150 kilometers of trekking trails have significant damages and 200 kilometers require maintenance and repair to make it safer for trekking. It is estimated that the trekking trails have sustained the damages of about NPR 426.1 million. Further an estimated NPR 5,711.3 million worth of income loss in trekking was expected by the end of 2015 alone (Table 4.6).

The tourism statistics for 2014 above shows a total of 2,567 registered travel agencies and tour operators in Nepal compared to 2,116 in 2012 (CBS, 2012)(Table 4.4A). Nepal Association of Tour Operators (NATO) estimated NPR 6.9 million worth of damages suffered by the Travel & Tour Operators in Nepal due to the earthquake. Further, NATO estimates showed that tour operators are expected to lose NPR 1,852 million worth revenue during May-Dec 2015, NPR 1,229 million revenue during Jan-Jun 2016 and NPR 1,843 million revenue during Jul 2016-Jun 2017, amounting a total of NPR 4,924 million losses in revenue (Table 4.6).

Table 4.6: Summary table of estimates of damages and losses in tourism & sub-sectors 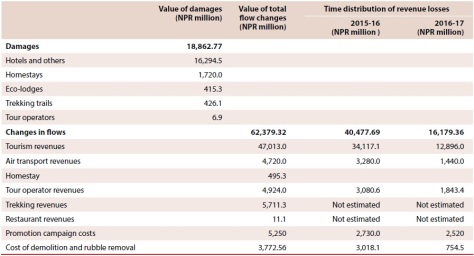 Besides major tourism stakeholders and sub-sectors mentioned earlier there are other tourism related subsectors providing their services. Civil Aviation Authority of Nepal in 2013 (Table 4.7A) and Ministry of Culture, Tourism & Civil Aviation in 2014 (Table 4.7B) showed an increasing market trend of tourist, trekking and river guides as well as consistent market trend in ultra-light, paragliding, skydiving, etc. These service providers had to suffer significant losses due to reduced number of tourists coming to Nepal. 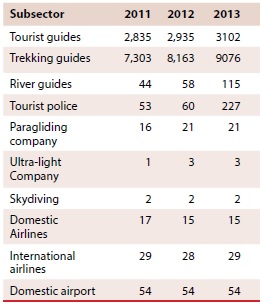 Following the Gorkha Earthquake, many roads and access trails to remote pilgrimage sites were cut off. All seven World Heritage zones in the Kathmandu Valley were closed and ticket collection from tourists was suspended. In the Kathmandu valley alone the losses from reduced revenues from the sale of tourist entry tickets to the World Heritage Sites and museums was estimated at USD 6.2 million over the 12 months period after the quake. (Table 4.7D).

A large portion of key tourism monuments and heritage attractions have been reduced to rubble. Few months after the disaster, the Tourist Guide Association of Nepal (TURGAN) reported that 228 tour guides were no longer employed as a result of the earthquakes as there were hardly any tourists to take around in Durbar Squares in Kathmandu, Bhaktapur and Patan areas. Nearly a year after the catastrophe, the number of visitors seems to be rising again.

The PDNA priced the total earthquake damages at NPR 517 billion, losses at NPR 189 billion and recovery needs at NPR 669 billion, roughly a third of the economy. Early estimates suggested that an additional 3 percent of the national population (around a million people) was pushed into poverty as a direct result of the earthquakes.

The cost of recovery for tourism is nearly NPR 39 billion which is 5.8% of the total recovery needs of the country. Starting from the demolition of damaged structures & rubble removal to reconstruction & recovery activities, there are numerous sub-sectors such as hotels & accommodations, trekking, tour operations and loan rescheduling as well as extensive promotional campaigns which need recovery attention currently.

Table 5: Summary of the cost of recovery

There are costs attached to respond to the market slackness endured both by the Nepal Tourism Board (NTB) and the industry as a whole. The NPR 400 million annual marketing spend of NTB under normal situations and the approximately NPR 1,800 million aggregated total marketing and promotion spend of the private sector may have to be increased multiple-fold to recover and revive the tourism market. It is estimated that over NPR 5 billion will have to be spent over the next couple of years for the targeted tourism promotional campaigns (Table 5).

(Part I) The Gorkha Earthquake 2015: Economic Impact on Nepal Tourism